Some truly exciting and Happy news worth sharing from Pont Aven, Brittany, France. I’m flying the flag for Ireland.

It’s a huge honour to be the first international artist for 30 yrs to be represented in ‘Galerie Artis’ and Galerie Ty-Aven, Pont Aven. This village is at the heart of French art history.

The ‘Beacon’ series and an exciting new subject will be the core. The photo shows my final meeting with the esteemed M Sylvian Caillobot, owner and principal curator. Words can’t convey my excitement.

The paintings are now exhibiting at Galerie Ty Aven. I am currently preparing my new work for the gallery, nudes.
Onwards…

The gallery link is here – Shaw exhibits at Pont Aven

Birth of the ‘Beacon’ Series.

The sea in art has always provided an allegory for life, death, hope and salvation. The narrative with my ‘Beacon’ series is very simple. Lighthouse, boat, sea and sky. These paintings are about hope. The viewer decides what each element means to them. Hope, dreams, direction to safety, overcoming the turmoils of life, salvation and redemption.

My grandfather, of Cobh, Cork, witnessed the last passengers embark the Titanic and also saw the victims of the Lusitania at Cobh harbour. For almost a decade my studio overlooked Howth harbour, a fishing village on the eastern coast of Ireland. Often, during the easterly storms I would watch the trawlers racing for safe harbour from the storms at sea. This made me appreciate the voluntary sacrifice by the men and women of the RNLI (SNSM in France). In calm and storm they bravely risk their lives to save others. The result was that I had two solo exhibitions in association with the RNLI.

The painting ‘On the Way’ creates the sensation of being in the sea awaiting rescue. This became the first element of the Beacon series. 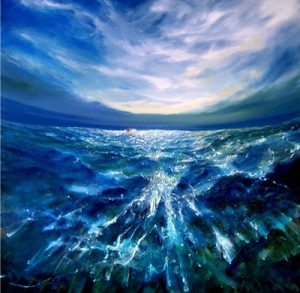 ‘On the Way’ –  Presented to the RNLI

Years later I had the opportunity to present a painting to another brave man. Dr Edgar Mitchell Apollo 14 and the sixth man to walk on the moon. Astronaut is latin for star-sailor. For ‘Earthwave’, I was inspired by the view of the earth from space. To be on a distant shore looking to home beyond the horizon. This is also a very ancient theme in Irish mythology. This became the second element. 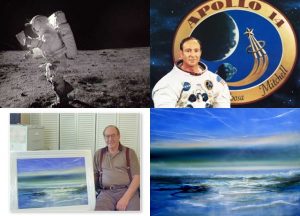 I have talked with Dr Mitchell several times and spoke of my grandfather witnessing the Titanic leaving harbour. What would he have thought of his grandson painting for a man who walked on the moon?

Dr Mitchell replied that his great grandfather was part of the first wagon trails to the west of America. Within a hundred years him pioneering the trail his great-grandson would walk upon the moon.

The sensation of being in the sea as a lifeboat approaches, crossed with the view from earth from space.

This marriage of motifs has brought us the ‘Beacon’ series’. This series is about the power and majesty of nature and how we as humans are so small in the vastness.

Ultimately these paintings are for the viewer to interpret and make their own. 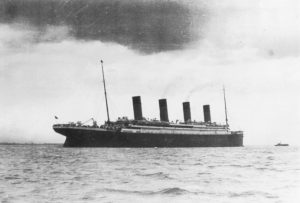 Last image of the Titanic -witnessed by my grandfather